Marvel and Mental Health: Why Is Moon Knight An Important Watch?

Many of us often turn to movies and TV shows to entertain ourselves, uplift our moods, or to just simply kill the time. The media is a powerful catalyst in defining how we view ourselves and the world around us. But depictions of mental health have not lived up to the mark when it comes to authenticity and accuracy. Marvel's latest television miniseries Moon Knight, starring Oscar Isaac and May Calamawy, attempts to bridge that gap. They showcase the journey of two characters – Steven Grant and Marc Spector – as they analyze countless mysteries led by Egyptian gods. 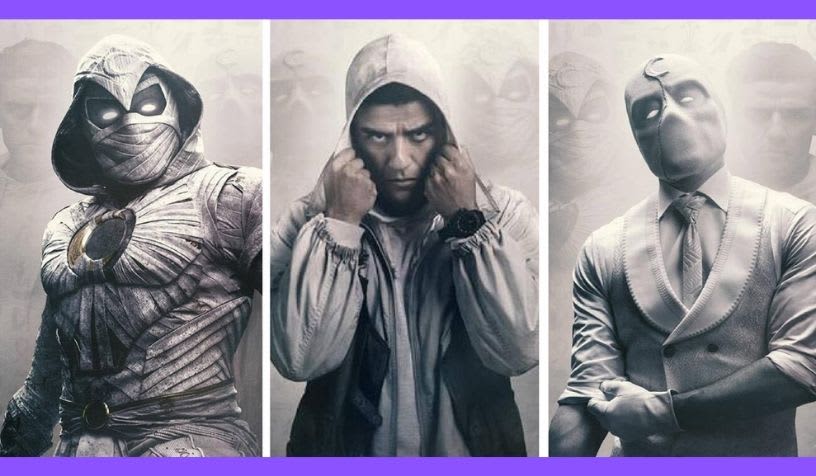 The story explores DID, and both characters, Spector and Grant, reside in the same body. DID, meaning Dissociative Identity Disorder, has been a common focus in various movies and TV shows due to its potential to be dramatized, including Psycho, Fight Club, and Split.

An individual with DID has two or more distinct and separate personalities residing in the same body, often referred to as the host. In Moon Knight, the host is Spector, while Grant is one of his personalities or alters. Towards the end of the season, we find out that Spector also has a third alter called Lockley.

Spector often had experiences of dissociation in the show. Dissociation can be understood as a disconnect in one's mind from their physical experiences. We all experience it to a certain degree, such as scratching absent-mindedly at your skin until it starts to bleed. 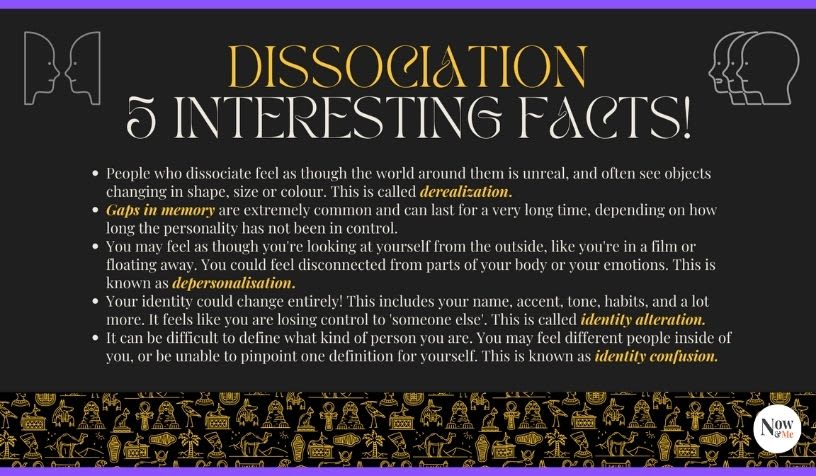 In DID, dissociation occurs as a result of extreme and repeated experiences of trauma, especially during childhood. It is a coping mechanism used by the child to protect themselves as a means of shielding themselves from further trauma and harm. Some famous personalities with DID include Roseanne Barr, Adam Duritz, and Herschel Walker.

DID is often mistaken for schizophrenia, and the same happened with Moon Knight. The back and forth exchanges between the two were mistaken by the audience to be schizophrenia. The series begins from Grant’s perspective and later clarifies that he is a personality created by Marc Spector. This disorder is often misunderstood by psychologists as well and can often take 7 to 10 years to receive a proper diagnosis and treatment.

How Does Marvel Studios Advocate For Mental Health Through This Series?

Moving away from the fiction and mythological themes of the show, Moon Knight does a tremendous job of portraying the hardships and challenges of what it's like to live life with multiple personalities. Marvel, and the entertainment industry at large, have a long path ahead for accurate representation, Moon Knight is a wonderful segue into Middle Eastern culture and advocacy for Mental Health.

The Differing Traits of Every Personality.

They dive deep into the differences in skills, knowledge, and preferences such individuals struggle with. It shows the reality of how alters can often be absent for long periods of time and resurface suddenly based on experiences.

In DID, every personality is a unique identity, with its own personal history, behavioural patterns, preferences, and characteristics. Grant has an English accent, works at a gift shop, and is timid and knowledgeable. He also has a sleeping disorder, and he says, "I can't tell the difference between my waking life and dreams". Whereas Spector is American, aggressive, married, and works as a mercenary. They share different relationships and experiences altogether.

Moon Knight makes a point of using reflections as a medium for conversations happening inside Spector's mind. One could argue that some aspects of their depiction aren’t entirely accurate, as individuals with DID are not able to see other alters. The delusions and hallucinations are generally not a part of the disorder. 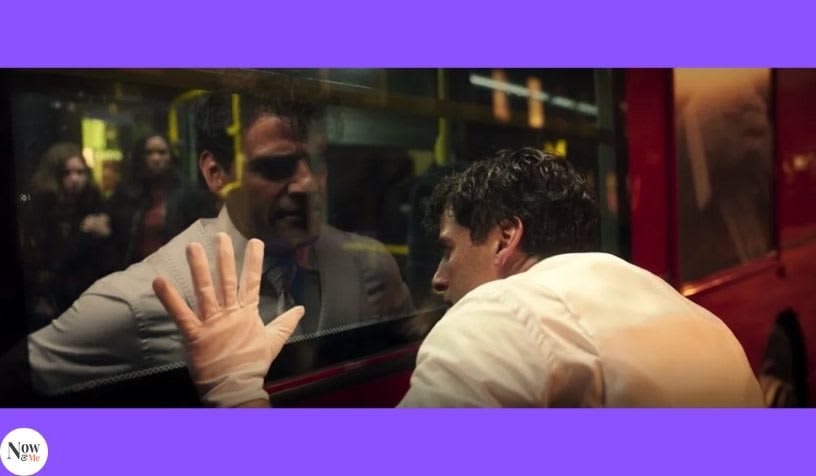 But based on the personalities’ awareness of each other, it is entirely possible for them to have conversations with each other inside their head. They do a great job of depicting these exchanges with the use of metaphors.

The degree of awareness in DID.

There's no concrete way to predict how personalities function with each other – some may be aware of each other and work collaboratively, some may be completely unaware and have huge gaps in time. While Spector is aware of Grant's existence from the get-go, Grant eventually grows aware of Spector, and they start to work together. They later discover that there is a third alter (Lockley) that they are both entirely unaware of.

Addressing external influences such as culture and media.

Since a lot of personalities are formed at a very young age, often even before the age of 6, they take inspiration from characters based in different TV shows, books, movies, and other forms of media. 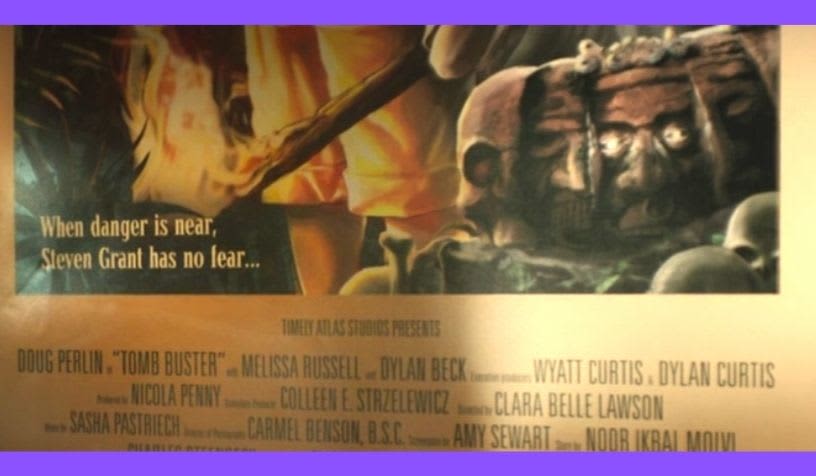 Marc's alter personality is based on an ambiguous film called "Tomb Buster," starring an explorer named Steven Grant, who Marc loved dearly. While Grant does not share a lot of skills and traits as the famous explorer, his thirst for archeological knowledge seems to stem from this.

Things To Keep In Mind With DID

Dissociative identity disorder (DID) is an extreme condition of dissociation, wherein an individual's thought processes, memories, emotions, behavior, or identity become disconnected. Here are five key points to remember about DID:

Dissociative and Dangerous Are Not Synonymous.

The media often portrays mental health as linked to violent behaviour. While that is true for the case of Moon Knight as well, it is not an accurate reality. Generally, dissociation occurs when individuals perceive danger to themselves and do not inflict danger on others.

They Cannot Rationalize Their Way Out Of It.

When people dissociate, their brains are attempting to hide from their realities. Logical thinking and rational advice will not be helpful to them and might even make them retreat further inwards.

Post-Traumatic Stress Disorder (PTSD) and DID both occur due to experiences of severe trauma, but they are not the same. 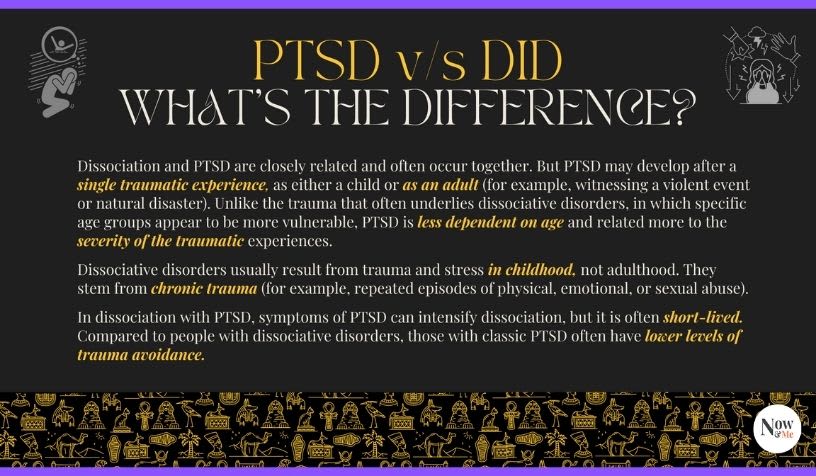 Personalities, or alters, are a state of the individual's mind. If you think of a person as a system, every alter is a fragment of the system, they combine to form a whole person. Moon Knight highlights how Spector and Grant are like two sides of a coin, they are one person.

If You Want to Help, Try Some Grounding Techniques.

Grounding techniques aim to physically and mentally reconnect individuals with their surroundings in an attempt to restore their grasp on reality. They often oriented around their five senses, for example, pointing out to the ground underneath them, asking them to identify the scents surrounding them, etc.

Therapy&Me: We’ve Got Your Back!

Our realities can feel incredibly challenging to deal with at times, and having a platform to release your emotions can be very helpful. Now&Me is a free-of-cost platform for you to share your experiences and seek support from a community of individuals facing similar issues in life. Remember, you’re not alone! Therapy&Me encompasses a wide range of expert mental health therapists who are well-equipped to deal with more severe symptoms and mental health troubles you may be facing. Reach out for help today.

1. Is Moon Knight A Villain Or A Superhero?

Based on the 1975 comic 'Werewolf by Night', Moon Knight was at first depicted as a villain and posed a severe threat to the comic's main protagonist. However, based on the TV Show, he is a superhero - though not all of his alters (namely Lockley) are on board with this.

2. What Is Moon Knight's Superpower?

Based on the comic books, Moon Knight is immune to psychic attacks due to his personal battles with DID. As a mercenary, he has immense combative intelligence, and due to his affiliation with Khonshu, he has lunar powers that enhance his physical strength, speed, and endurance on nights with a full moon. He's also a tech-genius since Grant in the comics is a billionaire, and not a gift shop worker. Khonshu's preference for him has also granted him the ability to self-resurrect, and he does so twice in the show as well.

3. Is Moon Knight An Accurate Depiction Of DID?

The creators of Moon Knight did extensive research to ensure that their depiction of DID is very accurate and realistic, and they've done a tremendous job on highlighting various hardships and struggles individuals with DID face. However, it is not 100% accurate, such as the violence linked with the struggle Spector faces. The majority of individuals with DID are not violent at all and use dissociation as a means of protecting themselves from the violence of others.