Domestic violence is defined as violence inflicted by anyone in the victim's immediate family. Spouses and ex-partners, direct family members, other relatives, and family friends are all included. It is used when the perpetrator and the victim have a close connection.

It can be an extremely traumatizing experience and can be both physical and/or sexual in nature. The victim’s physical and mental well-being is severely impacted and these effects can often last for years, often affecting their day-to-day livelihood.

The perils of domestic abuse on mental health.

It has been established beyond a moment's hesitation that violence harms victims’ mental health and puts them at risk of developing and maintaining mental illnesses. Violence can be traumatic, eliciting harmful stress responses that cause immediate and long-term mental and emotional harm. 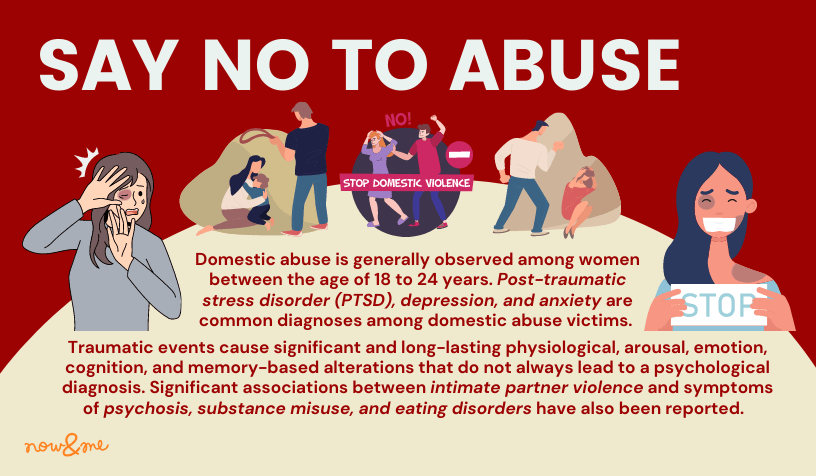 Forms of domestic violence do not include anything beyond physical, verbal, psychological, sexual, and financial abuse. Any experience of abuse can result in extremely damaging long-term impacts.

Perpetrators and Victims cannot be gender-stereotyped.

The patterns of violence and the IPV generalizations may be influenced by the greater socio-historical perspective of viewing women as the weaker sex and men as the predatory dominants. People also have a tendency to show more concern when the victims of domestic abuse are women, it is perceived to be more serious and in need of intervention than abuse against men.

Domestic abuse cases involving male victims or female perpetrators historically have not received equitable treatment within the criminal justice system because they are inconsistent with popular gender role stereotypes. But gender-based stereotypes have made it more difficult to identify instances of IPV in queer relationships.

IPV has been identified as a criminal offense in the Indian Penal Code and is properly described in the Protection of Women from Domestic Violence Act (PWDVA) 2005. The laws are only for female victims, and the language used is not gender-neutral. This reinforces stereotypes about men and women, as well as the appearance of IPV perpetrators and victims.

It renders male victims, female perpetrators, and queer individuals as hidden or marginalized in some way. This approach is mirrored in both policy and practice in terms of perpetrators’ and victims’ services and is currently demonstrated as having little effect in terms of reducing men’s IPV or providing intervention options for other perpetrator and victim groups.

Gender role stereotypes are pervasive but also incredibly damaging to people who experience both domestic and sexual violence. The impact of these roles, and the way in which they influence a spectrum of behaviors, is something that needs to be addressed to potentially help reduce violent crime.

Stereotypes and misconceptions generate stigma, making it even more difficult for individuals to muster the courage to seek help, putting those stuck with abusive partners at greater risk. These mentalities contribute to the anguish and alienation that various suffering victims experience, which is incredibly unfair.

1. Abuse is only physical, everything else is harmless.

Physical abuse is generally regarded to be worse than any form of emotional, psychological, or financial abuse. However, this perception overlooks the immense struggles and hardships victims of emotional IPV have to face because the results of it can be seriously damaging.

Many victims find their courage and statements dismissed when they speak up against the violence they have faced. In India, a popular example include the cases of marital rape. Most relationships aren't abusive when they begin but grow controlling and violent over time, often rendering the victim powerless in its slow progress, which makes it difficult for them to leave. Victims are too scared by the threats and harm to do something that could invite more violence and abuse against them.

3. Women are the only real victims.

While no one would say this statement out loud, it is often a subconscious notion a lot of individuals carry. They are quick to dismiss any instances of men experiencing abuse. Men are equally likely to be both victims and perpetrators of violence, but often don’t speak up due to embarrassment, shame, or fear of not being believed. Queer individuals are equally likely to face similar scenarios but are generally not considered in popular discourse. 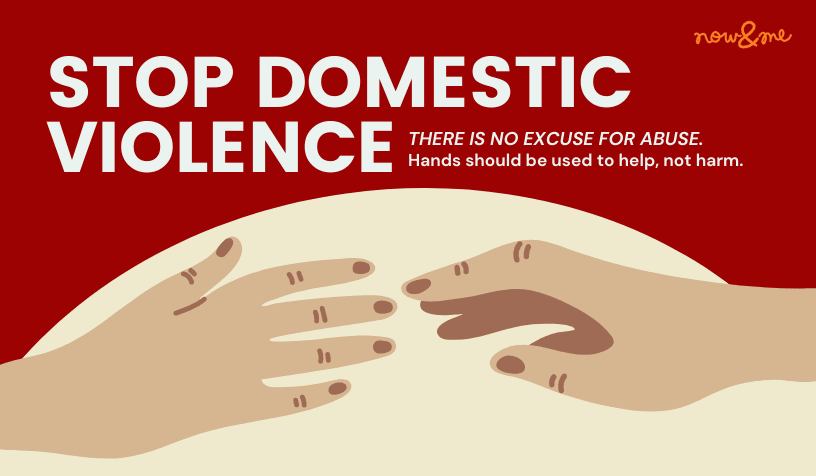 **4. No one gets hit without reason, they must have provoked this. **

Victims of IPV are often abused for being late to preparing meals, requesting some money, or even wanting to go meet a friend or relative. These demands are not provocative, and abusers use this concept as an excuse to reduce the gravity of their actions. Abusers can also walk away if they feel provoked or upset instead of abusing the other.

5. Only poor women get abused.

According to the National Family Health Survey of 2019-2021, nearly 25% of urban women and 32% of rural women in India (aged 18 to 49) suffer sexual or physical violence in their homes. It is also important to note that there is no data collected on the number of men or queer individuals suffering IPV and domestic abuse.

6. Domestic abuse is not common for queers.

Most of the Indian population holds an incredibly stereotyped perception of the queer community. While they are expected to be fun, quirky, and overtly sensitive (as shown in media), IPV and domestic abuse are incredibly common in queer relationships. Queer individuals are often physically abused by their parents and relatives after coming out and left homeless.

7. I can’t tell my therapist I’m being abused, they’d call the cops on me!

The legal policies surrounding mental health practices are very vague in India. However, there are ways to reach out for help without compromising your own safety. There are dedicated NGOs and mental health clinics that work specifically on cases of domestic abuse and IPV, who you can trust will not out you to the police or endanger you in any way. You can also reach out to our therapists on Therapy&Me and seek help.

8. It only happened once, there’s no point in speaking up.

According to the Domestic Violence Act 2005, any instances of actual abuse (physical, sexual, verbal, emotional, or financial), as well as threats of abuse, are condemnable by law. This act specifically functions for the Protection of Women and includes any mother, sister, wife, widow, or partner living in a shared household.

9. The abuser is mentally ill and must be helped instead.

People often try to justify or excuse their abuse and violence by speaking of mental illnesses. In instances where the abuser is indeed mentally ill, it does not explain why they only attack their partner or relatives, and not their friends or colleagues. Mental illnesses also do not make any person abusive, which is another negative stereotype perpetuated by the media.

Where can you reach out for help?

If you're someone who's suffering from domestic abuse in India, and you don’t feel safe reaching out to the police or someone you know, you can reach out to an NGO, therapist, or a hotline for support. Women’s helpline numbers for domestic violence are listed below. Help is available, reach out today. 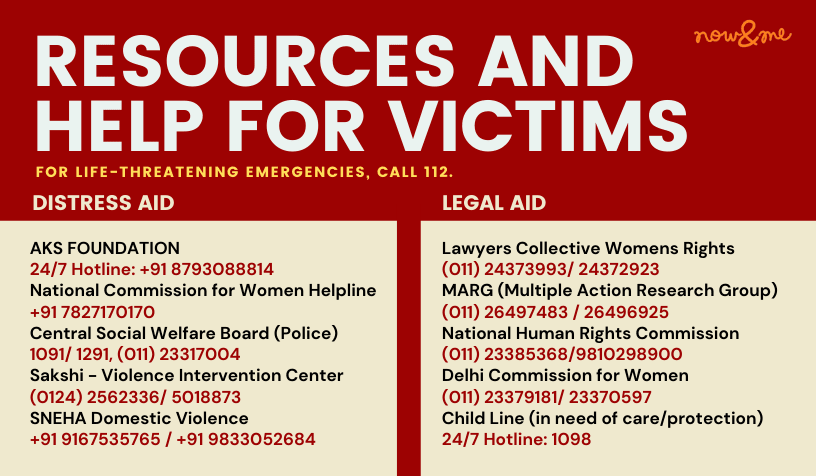 Talk about your experience on Now&Me.

Experiences of trauma and abuse can often leave us alienated from the world around us. Share your experience on Now&Me, a free-of-cost platform where you can find solace and support from a community of individuals facing similar issues in life.

1. How To File a Case for Domestic Violence?

You can file an FIR or complaint with the local police station or contact an NGO to help you take your concern directly to a magistrate. Your case will be recorded under the Domestic Violence Act 2005.

2. Which Section of IPC Protects Women from Domestic Abuse?

According to the Criminal Law (Second Amendment) Act, 1983 (46 of 1983), the Indian legal system created Section 498A of the Indian Penal Code, which is specifically meant for dealing with domestic violence.

3. What is the Punishment for IPV?

For the 4 forms of cruelty highlighted under IPC Section 498A, the punishment is imprisonment for up to three years and a fine for IPV. The complaint against cruelty need not be lodged by the person herself. Any relative may also make a complaint on the victim’s behalf.