What Every Stranger Things Character Has Taught Us

Stranger Things has offered us a multitude of valuable lessons with its well-written characters, plot lines, and relationships. This article aims to highlight some of the most important ones.

Stranger Things is hands down one of the most captivating and treasured television series at the moment, with fans around the globe already buzzing in anticipation for what’s coming next. Their most recent season was an absolute crushing hit! Netflix reported that by May 30, 2022, Stranger Things 4 had been viewed for more than 287 million hours, putting it in the top 10 series of all time.

Every single character in Stranger Things has a role to play, and they build up to a spectacular storyline. The difference in ages and life experiences also offer us a variety of perspectives on the very same situation, and it’s brilliant how everyone comes together, united to defeat the terror and evil. 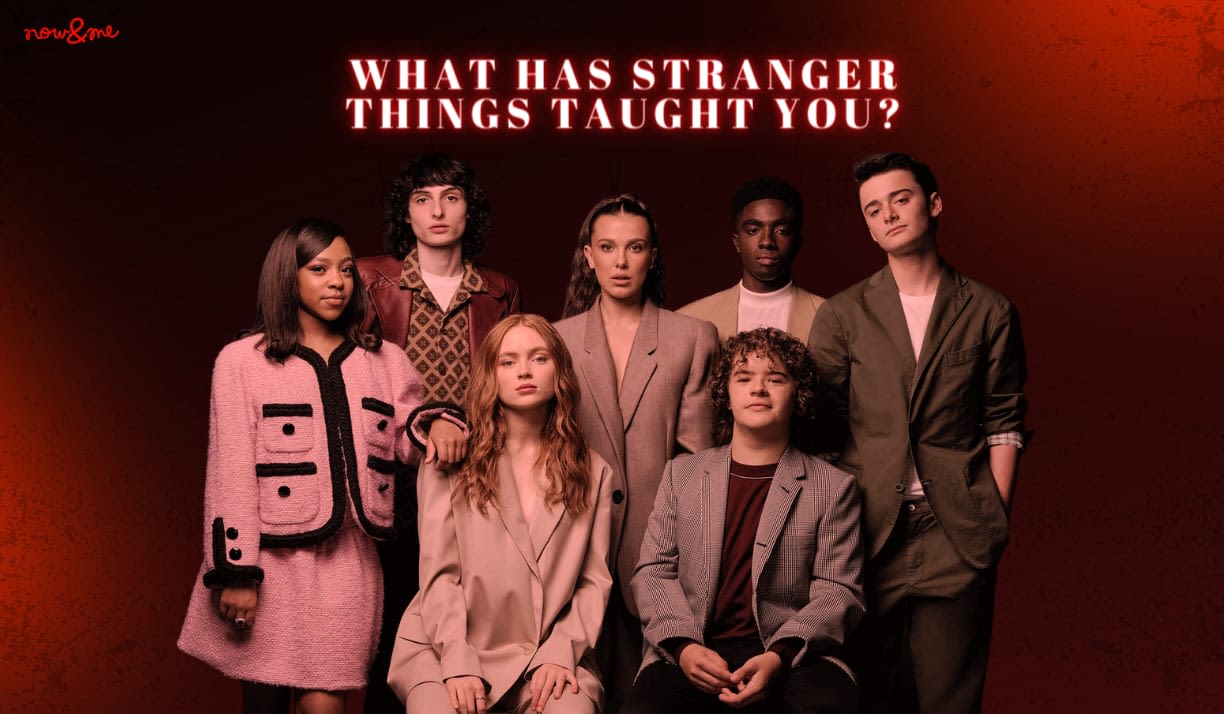 1. Look at things upside down!

Even the title of the show's parallel world, "The Upside Down," implies that it’s more like a different side of our world, just with a varying set of degrees, temperatures, and perceptions. It emphasizes how crucial it is to approach a situation from a different angle, and Nancy Wheeler does this best. She goes above and beyond to understand a situation, especially as a journalist. It is all too easy to feel frustrated when one is constrained by the same viewpoints and methods, we often get tunnel vision and hyperfocus on the ‘right’ way ahead and fail to consider multiple perspectives.

2. Embrace your inner self.

While it’s important to look around us, it’s equally important to look within. The cohesiveness within the characters doesn’t just come from their united goal, it’s also due to how they all maintain their individuality and bring their strengths to the table. But they’re open about their vulnerabilities and balance each other out. When Dustin was still a young boy and didn’t have access to every resource he needed, he relied on Steve to help him out and they’ve grown to be one of the most loved duos in the show. They trust each other, rely on the other’s expertise and knowledge, and make up for what the other lacks. Where Dustin can be too enthusiastic to pursue a lead, Steve puts his foot down to draw limits for safety. The abilities or talents of every character come together to function as a whole, much like puzzle pieces.

3. We need to learn to trust our gut.

The characters continue to trust their instincts and use their heart and soul as their guide, even when things start to get strange (and in Hawkins, things do indeed get very, very strange). This is true even when their heads tell them that what they are experiencing is impossible to be true. This is never more evident than in the case of Winona Ryder's character Joyce, who steadfastly refuses to give up on her son in Season 1, and again in Season 4 with Jim Hopper, even in the face of overwhelming odds.

4. We need to process our emotions, not run away from them.

Every episode of the show has required them to deal with great stress and fear, but all the characters have learned to accept their emotions and be brave in the face of danger. Anger is frequently frowned upon in life and business, much like fear. But Stranger Things demonstrates how, only when properly managed, it can be used as a potent force for good, as repeatedly exemplified by Eleven in the course of the series.

5. Stand up for yourself and the ones you love.

Eleven has been highly praised for standing up for her now-boyfriend Mike in the previous seasons when he got bullied. All 4 boys in the group seem to have experienced bullying in some way or the other. Over the first 3 seasons, the group shows us how they never back down, never run away from a situation, and find a way to deal with it instead. However, in Season 4, Eleven hits her bully in the face with a figure skate and is condemned for it by everyone, including her boyfriend and most of the fans. Violence isn’t the answer, but Eleven didn’t deserve to be so abandoned in her situation, especially by her own loved ones. Protect yourself as well as your friends.

6. Our inner child is our strength.

We are urged to think about the value of imagination throughout Stranger Things. In times of downtime or idleness, we can use our creative imagination to solve problems in novel ways. Our entire existence is influenced by our imagination, which also enables us to create. It inspires complex theories, visions, and inventions in all fields of endeavor, including academia, engineering, and the arts. The characters reach incredible heights thanks to their imagination, just like in Stranger Things. The lesson here is to always be imaginative.

Among the first relationship principles Eleven was taught was this one. If you lie to a friend, the relationship will probably change, just like when you can't keep a promise. Don't take trust for granted; it's a priceless asset. Don't lie, and before you try to come up with a justification, consider something. Will the lie ultimately make things better? No. Not at all. You would have been curious to learn the truth. Usually, we do. It ultimately causes less pain and more benefit. Be an excellent companion. 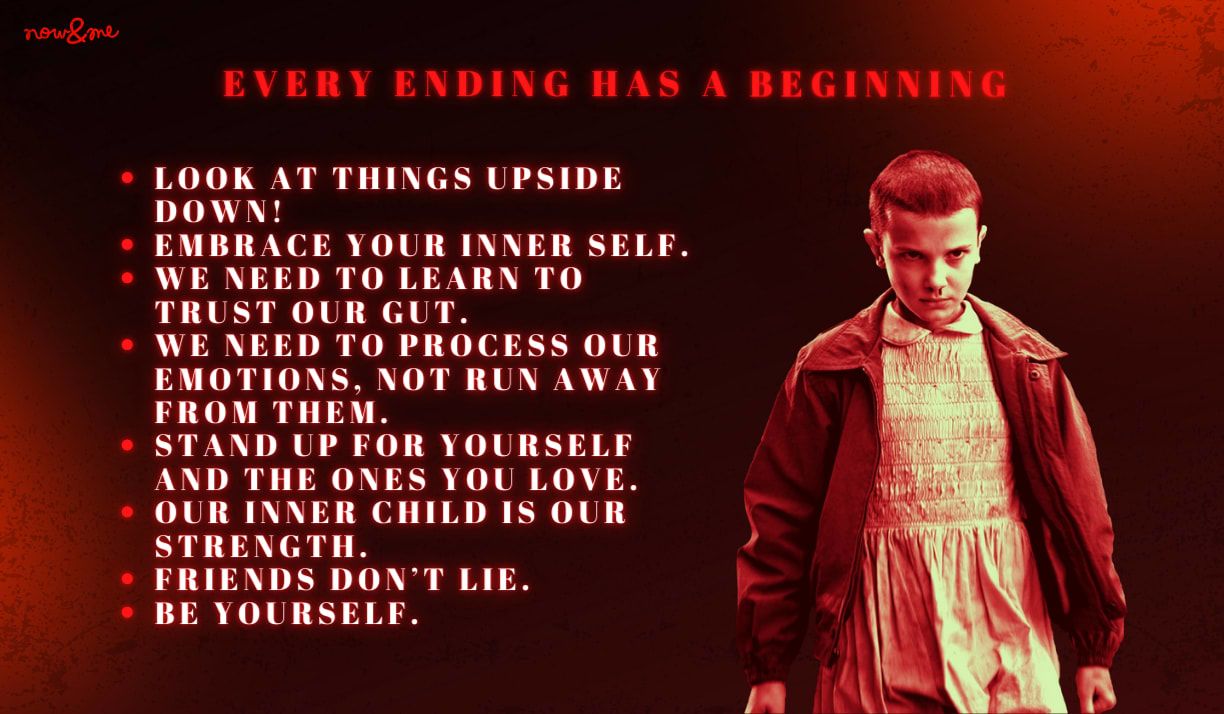 Why Stranger Things Is Doing So Well

Stranger Things may not seem strange to someone who grew up in the 1980s. It's like a tribute to their youth, complete with references that this member of Gen X can enjoy. But they execute it exceptionally well, with a coming-of-age story that Gen Z can relate to as well.

Stranger Things undoubtedly demonstrates that friends can accomplish amazing things as long as they have each other's backs, despite the fact that it may sound a little corny. This holds true for each season of the program. No matter what they are up against, the young characters always work as a team to combat the supernatural elements in their town.

Come and share what you love about the show and what it has taught you over its 4 seasons at Now&Me! We’re a peer-support platform, and we’ve got some die-hard Stranger Things fans. PS: We’d love to know what your favorite song against Vecna would be.