Are You Dating A Narcissist? Here Are 5 Things You Need to Know

When everything in your relationship seems to be all about your significant other, you begin to question whether your partner is a narcissist. Such relationships often begin like a dream come true, sharing a wondrous bond straight out of a movie! But these fantasies soon fade and reveal the bleak and dark reality of your shared future.

You end up giving more than you receive, feeling neglected with your needs unmet, often no less than a mere object in the relationship. It can really take a toll on your own mental health and be incredibly challenging to deal with such unhealthy behaviour. 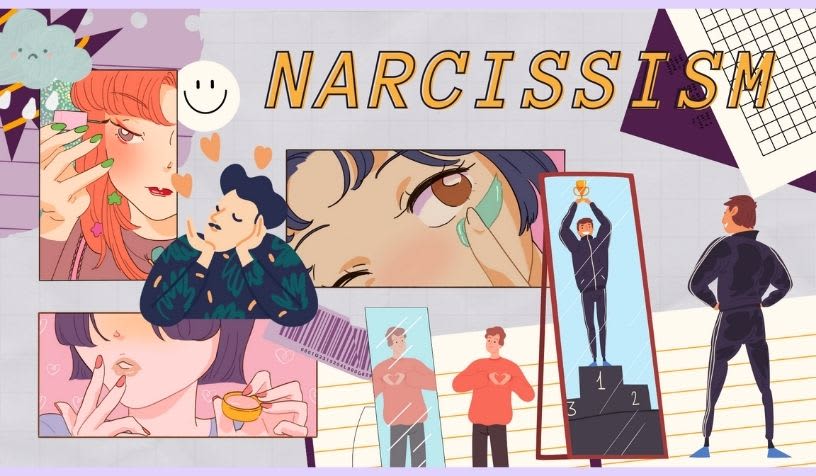 What Makes A Narcissist Toxic?

We often call our friends (or even strangers!) narcissists when they take way too many selfies or constantly talk about themselves. But someone with Narcissistic Personality Disorder (NPD) falls on a completely different level, with a very strong belief that they are truly unique and superior to all other individuals, and demand the acknowledgement and appraisal of the same. 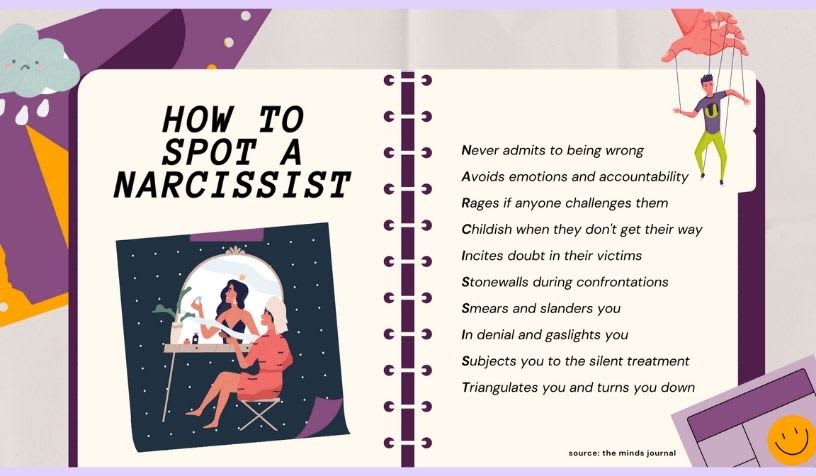 Individuals with NPD can be incredibly dismissive and ignorant, and they are unable to grasp the needs and opinions of others. They have an excessive need to be admired and respected and carry a sense of pride and entitlement with themselves. They are often also envious of others or believe others are envious of them. Such narcissists lack empathy, and they live by the belief that they are incredibly special and should be regarded with powerful or highly valuable positions. Their temperament generally results in arrogant or disdainful behaviour. They can be exploitative and manipulative in nature and are unable to take other people's feelings into account in their actions or opinions.

How Does NPD Affect Relationships In All Areas Of Life?

When we start dating narcissists, we gravitate toward them because of their charming and fascinating nature. Narcissistic individuals will only put in the effort to be in a relationship with another when they believe they've met someone who is also special because they believe those are the only people who can appreciate them properly. In these situations, you will experience their empathy and compassion and be showered with compliments.

But soon enough, you'll notice them start to hog conversations to talk about themselves. They lie often and have a low sense of self-esteem, which makes them sensitive to criticism and needy for compliments. Narcissists want you to chase them, and they particularly love to feed off of highly empathetic individuals in search of praise and affection but don't grasp concepts of empathy and understanding well enough to reciprocate those feelings.

People with NPD are also highly driven and often found in powerful positions, such as supervisors or managers. But when narcissists lose control, they may be exploitative in their leadership, chasing selfish goals and alienating their colleagues. They are also not rule-abiding people, and they can be very demoralizing and dismissive of other employees, especially those subordinate to them. Narcissism can be cured with the help of a therapist.

Narcissists like orienting themselves with those who they feel contrast against them in a negative manner, hence, making them look more positive and superior. Here are some things to look out for if you doubt your partner is a narcissist:

1. The Pompous and Pretentious Mannerisms

Pathological narcissism encompasses big beliefs of grandiosity, perceiving oneself as incredibly special, unique, and superior to other people. They come across as entitled, arrogant, dismissive, and disdainful and are often neglectful of others. They also have a very fond interest in posh, elegant, and elite events, people, and items.

2. Your Intimate Moments Are Just For Show

Sometimes, the little cherishable moments shared in romantic relationships can seem shallow and superficial. In the moments, you may feel like an object of desire or something to be used for personal gain by your significant other, instead of feeling your love and care for the other be reciprocated. 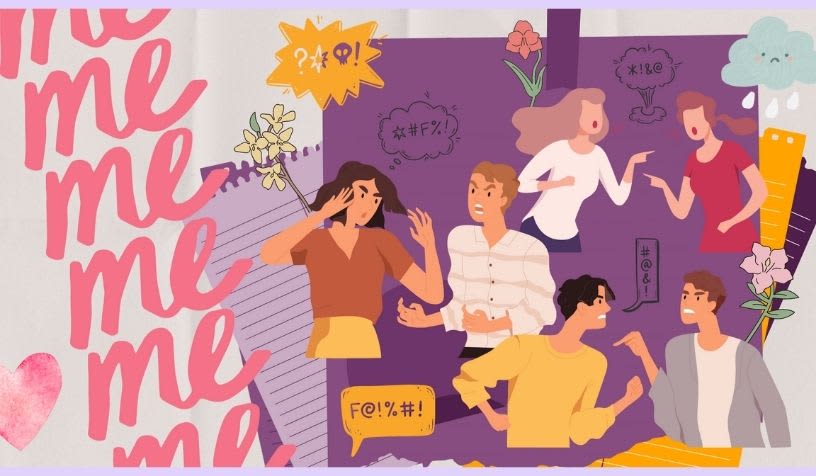 3. The Concept Of Constructive Criticism Does Not Exist For Them

Narcissists hate criticism the most; they are incredibly defensive and guarded. They despise being regarded in a negative manner or experiencing feelings of shame and humiliation, and live their life in denial of their faults. Narcissists also tend to have low self-esteem, which further drives them to maintain a positive depiction of themselves.

4. You Feel Cornered and Triangulated

Covert narcissism involves adamancy about being the ones in control, especially in a relationship. While they are not blatantly abusive, they use common tactics such as gaslighting, giving you the silent treatment, or triangulation to dominate their significant other. 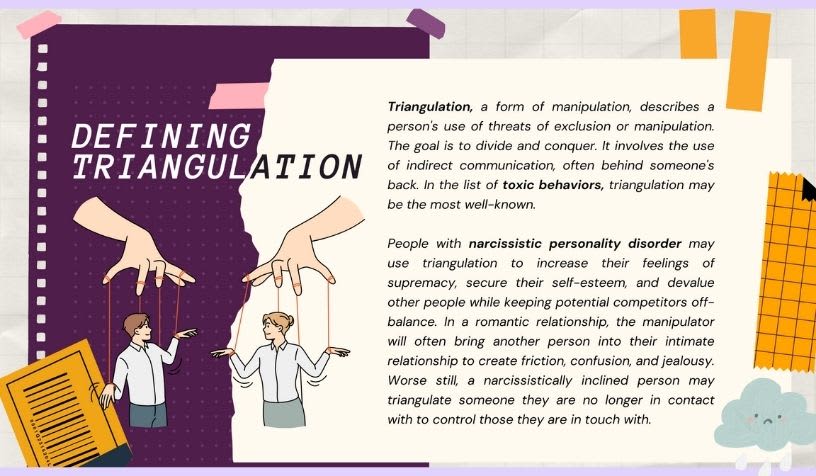 5. Passive Aggressiveness Runs In Their Veins

For individuals with NPD, passive-aggressive behaviour is used purposefully to convey frustration and make themselves look superior. It is driven by their entitled and vindictive nature, where they're quick to subtly push the blame of their own faults on you or someone else. Their refusal to complete duties or chores is excused by how they feel such tasks are beneath them.

How Can You End Your Relationship With A Narcissist?

We're often caught off guard by the time we reach the realization that our significant other is a narcissist. Ending relationships is tough enough by itself, but this is necessary for the future and wellbeing.

It's important to remember that you need to be good to yourself and practice some self-compassion. Your experiences, vulnerabilities, and traumas also matter. If you've felt exploited and abused in any way during this relationship, it's not just in your head — it matters. 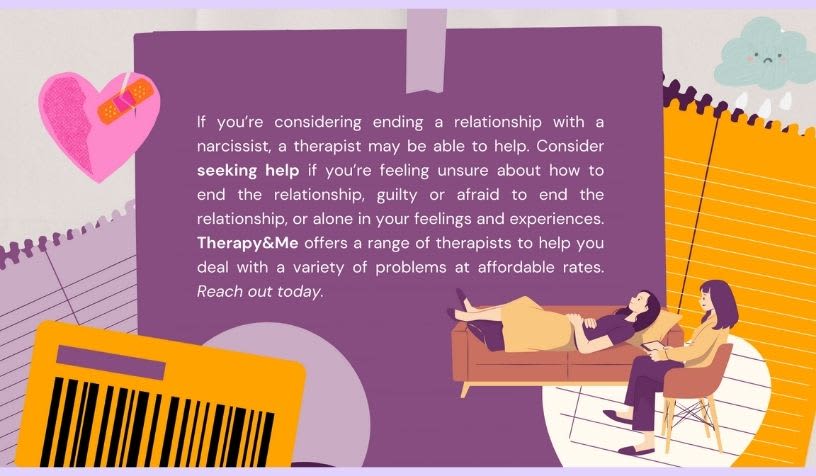 There's a big difference in the promises you both make. Narcissists are known to be dramatic and will make grand promises of "I will change and work on my problems" and "I promise our future is going to look different" but hardly ever live up to them. They lie in order to defend themselves as they feel threatened. Don't give into their lies. There's never a right time to leave someone.

Narcissists are incredibly defensive and manipulative and will use every tactic in the book (including ones they've used on you before) to keep you attached to them. Their goal is to make you feel more insecure in order to grow your attachment towards them, in a way that they always have the upper hand in the relationship. They'll fight it, try to make you jealous, blame the narrative on you to incite guilt and shame you into staying. They will even go as far as lying about going through a stressful or traumatic time and needing support.

Break ups, hardships, and loneliness can creep up on us at very unexpected moments. We all need care and support to keep ourselves going ahead. Now&Me is a free-of-cost platform for you to share your experiences and find solace from a community of individuals facing similar issues in life.

1. How Do Narcissists Destroy Empaths?

The absence of empathy in a narcissist is the polar opposite in that of an empath; they thrive in it. Narcissists engage with people with the sole purpose of sinking their power, jeopardizing their efforts, and lowering them to a state of desperation to gain the upper hand. Empaths are often victims of this and give themselves away in the process.

2. Why Do Narcissists Love Social Media?

Social media is a quick and easy source of instant gratification. For a narcissist, it's a great platform to boost their egos, be showered in compliments, and feel validated. They crave attention, where quantity often matters more than quality, and social media provides followers instead of friends, who serve their needs better.

3. How Do Narcissists Treat Their Exes?

For narcissists, their ex partners are nothing less than a source of convenience. If an ex has not cut them off from their lives, a narcissist will try to keep using them for sex, money, praise, attention, affection, and any other desire they may have that they want satisfied. It's all about their own needs being satiated at the end of the day.