As human beings, we have a tendency to lie once in a while. We lie to protect ourselves from trouble or to escape from miseries. But what if someone has made a life out of lies? People who have a tendency to lie on frequent occasions for small to big things without any reason are known as pathological liars. They have a nature to lie to anyone about anything without thinking about the outcomes of that lie. They hardly take into consideration people's feelings and disrespect them with their lies. In this article, we will learn more about pathological liars and how to deal with them.

What Defines the Personality of a Pathological Liar?

Pathological liars can be defined as a person who is left with no honesty for themselves as well as their loved ones. They are confident, manipulative and cunning at lying so much that sometimes they forget the difference between reality and lies and start believing those lies unconsciously. They frequently lie without any motives behind it. They have no limits on lying, and if confronted, they will get aggressive and will not accept their false lies.

Difference in Between Pathological Liars and Compulsive Liars

A compulsive liar is someone who lies out of habit. Due to upbringing in unsafe homes, they adopt the habit of lying to avoid any hurtful conflicts. Unlike pathological liars, they don't lie beyond limits and know the difference between reality & lies; if confronted, they will admit their mistakes and lies that they have told. 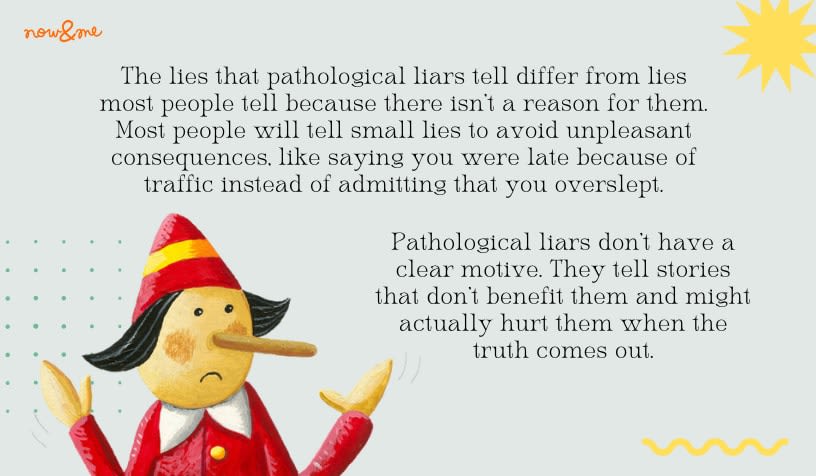 10 Signs You Are Dealing with a Pathological Liar:

The motive of people behind lying is usually to gain benefit. We lie to exit from a troublesome situation or to avoid public embarrassment. But the lies of pathological liars are different from others' lies. They are so used to lying that, at many times they lie without any motives.

Pathological liars have the ability to create false stories with convincing details that are hard to catch. They are smart enough to create believable stories, which are difficult for a normal person to differentiate from the actual truth.

3. Portray Themselves as Victims or Hero

Apart from being great storytellers, pathological liars often create stories in which they show themselves either as a hero or victim. Their intention behind this is to gain attention, sympathy and admiration from the listeners.

4. Becoming Unconscious of Their Own Lies

According to scientific research, it's often difficult to find out the reality in the stories of pathological liars. They are so unconscious of their own lies that they gradually start believing in those lies and forget the difference between reality and fiction.

We all know that it's difficult to remember every detail of the lie that we share with others. That's why pathological liars tend to lie in general terms so that they can avoid the conflict of any lies that they have told in the past.

Due to the nature of frequent lying, pathological liars easily lose their jobs, relationships and respect among people. Their useless, constantly lying behaviour often ends up frustrating for others.

7. Become Angry or Defensive When Confronted

When people try to confront pathological liars for their lies, they usually lose their temper and become defensive. It's difficult for them to accept the fact that their lies are creating miseries in other people's lives.

A pathological liar lies more than others, an average of about 10 times a day. They don't care about the lies; all they care about is the process of lying.

According to studies, pathological liars have the capacity to lie at least for six months continuously. They may continue a lie for a long period or lie one after another to maintain the consistency of the lies.

10. Have Little Respect Regarding Others Feelings

While lying, pathological liars don't consider the feelings of others. Their sole purpose is to lie, whether it is disrespectful to the person or not. They never take into account others' feelings and often hurt people around them with their baseless lies. 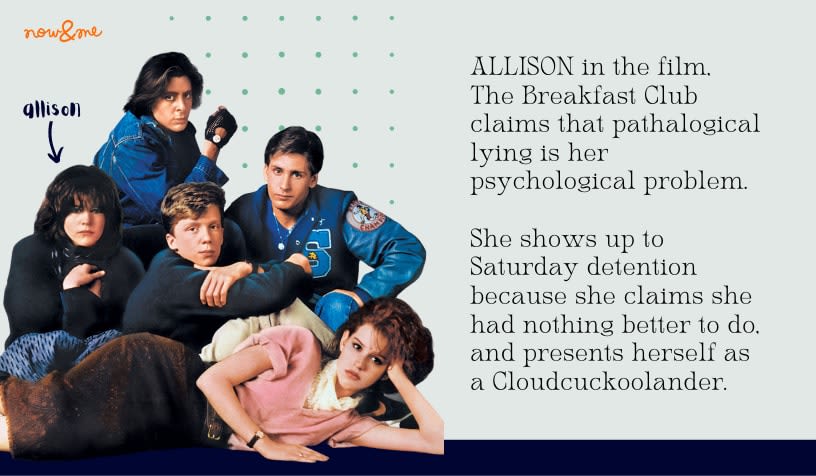 How to Deal with A Pathological Liar

Being around a pathological liar can be energy-draining and cause stress in your life. It's important to maintain healthy boundaries with them in order to avoid unnecessary stress, sadness, anger and confusion in your life.

2. Confront Them with Proofs

Confronting pathological liars is one of the most difficult things for a normal person, but it's also essential for yourself as well as the person you are dealing with. Recall the lies that they told you and others and how you reacted to them; maybe they will try to admit their mistakes.

3. Be Ready for Their Reactions and Don't React with Them

When a normal person tries to confront a pathological liar, they can expect anger, blame, shame, gaslighting and other forms of denial from them. Make sure to be patient in this situation and don't lose your temper. It will ultimately lead to unnecessary arguments without any conclusion. Save your energy.

If your loved one is constantly into lying and they really want to change themselves for the better, then you can help them by setting realistic goals. Don't expect them to change overnight. A habit takes time to learn and unlearn. Set small goals so that you and both your partner don't get discouraged.

Many times there is scope for improvement if one needs to improve themselves. Pathological liars can seek professional help, try to find the root cause of their nature and reach out to their loved ones to have patience with them without any shame or judgements in this journey of transformation.

Here are some therapies which pathological liars can take:

If you feel like you are dealing with a person who constantly lies then come share your experience with us. Now&Me is a platform which allows people to share their life experiences anonymously about any mental problems they are dealing with. It will not only benefit you but to others also. Sharing your thoughts with others without any judgements or shame will allow you to declutter your mind and will also provide a fresh perspective towards the world.

Express your feelings in a safe space and find help on Now&me. Sign up now and create a safe place for your thoughts and feelings with Now&Me.

1. Is Compulsive Lying a Disorder?

Compulsive lying may or may not be a mental disorder. It is something which is done out of habit. A person who has experienced an unsafe environment while growing up gets used to compulsively lying in order to protect themselves from conflicts. They are not very cunning and have a sense of consciousness between reality and lies. If confronted, there is hope that they will accept their lies.

2. What Is A Constant Lying A Symptom Of?

A person who has a habit of constant lying can be called either a compulsive liar or a pathological liar. The major difference between these two types is that pathological liars go beyond limits, and if confronted, they backfire the person with different forms of denials. Whereas if you try to confront a compulsive liar, there's a hope that they don't react; instead, they will admit their mistakes.

3. What Is A Psychopathic Liar?

A psychopathic liar is someone who is used to lying without any solid reasons. Their lies have no limits, and usually, they don't take into consideration others' feelings. They have a tendency to create false stories around those experiences that they have never done or experienced.