How to Increase Serotonin and Dopamine Naturally?

I remember being told how I was a source of 'serotonin' for my friends, and well, I couldn't be more glad :D

Some of you must be wondering why my friends called me 'serotonin', which is also a neurotransmitter. Well, serotonin, along with dopamine, are commonly known as the 'happy hormones', which in layman's language are responsible for the mood and motivation of the body, ultimately also affecting our emotions and the overall functioning of the body. Therefore, being someone's source of happiness, or that very 'adrenaline rush' is surely a thing to be proud of, and so was I.

Speaking of the chemicals mentioned above in our body, the lack of any of these can result in several issues, which may be physical or emotional. Therefore, it is of utmost importance to have optimal levels of both for a balanced functioning of both our mind and body.

What is Serotonin and Dopamine

Both serotonin and dopamine are neurotransmitters, also known as the brain's chemical messengers. They communicate via neurons and are called the 'happy hormones' as they play a role in improving positive moods and emotions. Both dopamine and serotonin also play a role in controlling digestion through subduing or boosting appetite depending on the body's needs.

Even though they are known to have similar effects on our brain and body, they work in their own unique ways. On one hand, serotonin is associated with feelings of happiness, focus and calm. On the other hand, dopamine is associated with feelings of rewards, inspiration, productivity, recollection, attention, and even regulation of body movements.

The Importance of Serotonin and Dopamine

The importance of serotonin is often realized by psychologists because of its role in mood. As mentioned above, serotonin is primarily responsible for a person’s ‘happiness’, and low levels of it are then associated with various mood disorders or depression. Adding onto this, deficiencies in the levels of serotonin are also known to contribute to the development of Social Anxiety Disorder and Obsessive Compulsive Disorder.

With its association with feelings of pleasure and satisfaction, dopamine’s importance is realized when looking at aspects of motivation. The reward system involved in dopamine also helps to develop a positive mood, along with increasing one’s motivation.

Adding onto this, with dopamine’s contribution in body movement and coordination, low dopamine levels can be a major cause for the development of movement disorders such as Parkinson’s disease.

Therefore, together dopamine and serotonin interact with each other to maintain a chemical equilibrium in the body.

Ways to Increase Serotonin and Dopamine 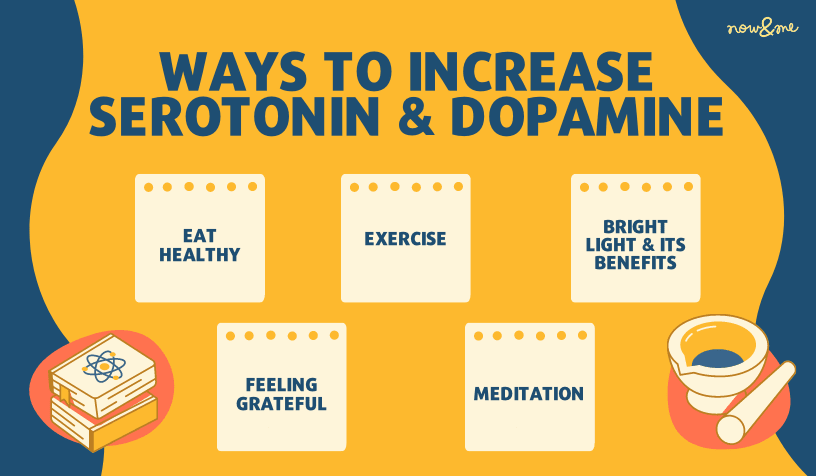 Exercising regularly is anyway known to lift one’s overall mood. With respect to levels of serotonin and dopamine, researchers have suggested that long-term cardiovascular exercises can increase serotonin levels in the brain. Speaking of dopamine, research indicates that engaging in aerobic exercises benefits people with Parkinson’s disease, improving their motor control.

2. Bright light and its benefits

We are often told to step out to feel better! However, researchers suggest that as less as even 10 minutes outdoors, in the bright daylight can help us feel better than before, as the amount of time spent in sunlight correlates with serotonin and dopamine synthesis, which is why going on a brisk walk, or simply reading a book sitting in the balcony can be good for the chemicals in our bodies!

A healthy diet is known to promote the holistic well-being of an individual, but a few components in our diet directly contribute to the synthesis of serotonin and dopamine.

For example, Omega-3 fatty acids are known to boost serotonin levels without any withdrawal symptoms, unlike coffee. Omega-3s, which can easily be found in Salmons, can also help reduce depressive symptoms.

Speaking of dopamine, the amino acid tyrosine plays a vital role in the synthesis of dopamine.

Tyrosine itself can also be made from another amino acid called phenylalanine, which can, in turn, help in maintaining dopamine levels.

Foods rich in protein like eggs, dairy, and turkey, to name a few, are a direct source of tyrosine and phenylalanine.

Deep thinking and improved memory result from increasing amounts of tyrosine and phenylalanine in one’s diet, as they increase dopamine levels in the brain.

Being thankful and acknowledging the things that make you happy can, in turn, affect the brain’s reward system, as it also correlates with the release of dopamine and serotonin. The feeling of gratitude is directly linked to the feeling of happiness.

Meditation often requires us to focus and be alert of our bodily functions and responses, while being in a state of peacefulness and relaxation. Evidence has indicated an increase in the release of dopamine and serotonin, which may ease stress and create feelings of inner calm.

To conclude, it is important to note that one’s lifestyle, which may include one’s eating habits, sleep hygiene, physical activity and much more, is directly known to affect the levels/synthesis of dopamine and serotonin.

Even though therapy is proven to uplift one’s mood, as it provides an individual with an insight into their problems, ultimately increasing the levels of serotonin if in case you are unable to speak to a professional for whatever reason, download the Now&Me app to share your feelings. Give us a chance to become your source of serotonin <3

No foods are directly high in serotonin, as it is a chemical substance produced by various components in our body. Eggs, cheese, pineapples, tofu, salmon, nuts and seeds, and turkey are some foods that are known to increase serotonin levels in an individual, as they have components that can help boost the synthesis of serotonin.
There are no defined ways to specifically check dopamine or serotonin levels, health care professionals often choose to directly treat the symptoms of their deficiencies.