How To Identify Narcissism and Protect Yourself from Toxic Behaviour

An optimal amount of self love is not desired, but also accepted by people around us. But if you know of people who are full of themselves, to an extent where it’s hard to handle them around, or to an extent where other people’s needs are intentionally ignored. then you know what I am talking about!

A personality trait like narcissism has existed since the existence of humanity. We are of such personalities in the past, as well as in the present. Be it Adolf Hitler’s fantasy of becoming the world’s greatest and most powerful leader by exterminating Jews, or Kanye West, who often claims himself to be The God, narcissistic personalities are quite often infamous for their immense love they express to themselves, and excessive lack of empathy and regard for others.

Therefore, the term narcissism may often be used casually in today’s time, but in psychological terms, narcissism doesn’t mean self-love—at least not of a genuine sort. It’s more accurate to say that people with narcissistic personality disorder (NPD) are in love with an idealized, grandiose image of themselves, along with being in love with this inflated self-image precisely because it allows them to avoid deep feelings of insecurity. But propping up their delusions of grandeur takes a lot of work—and that’s where the dysfunctional attitudes and behaviors come in.

Narcissistic personality disorder involves a pattern of self-centered, arrogant thinking and behavior, a lack of empathy and consideration for other people, and an excessive need for admiration, and often accompanies other psychiatric disorders.

It’s important to note that narcissism is often also recognised as a trait, as mentioned above but it can also be a part of a larger personality disorder. Not every narcissist has Narcissistic Personality Disorder (NPD), as narcissism is a spectrum. People who are at the highest end of the spectrum are those that are classified as NPD, but others, still with narcissistic traits, may fall on the lower end of the narcissistic spectrum. 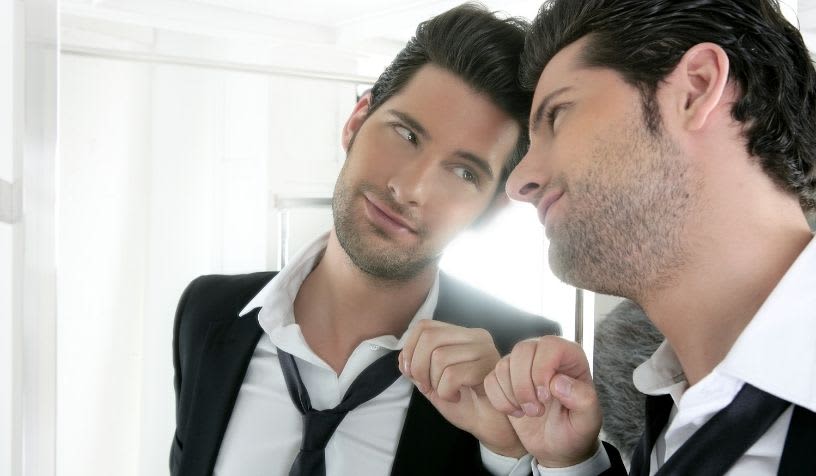 There are two different types of narcissism that narcissistic behavior can fall under. The two types can have common traits but stem from different childhood experiences, along with dictating the different ways people will behave in relationships, namely Grandiose Narcissism and Vulnerable Narcissism.

People with this behaviour were most likely treated as if they were superior or above others during childhood. These expectations can follow them as they become adults. Those with grandiose narcissism are aggressive, dominant, and exaggerate their importance. They are very self-confident and aren’t sensitive.

This behaviour is usually the result of childhood neglect or abuse. People with this behaviour are much more sensitive, as Narcissistic behaviour helps to protect them against feelings of inadequacy. Even though they go between feeling inferior and superior to others, they feel offended or anxious when others don’t treat them as if they’re special.

How Is Narcissism Diagnosed? 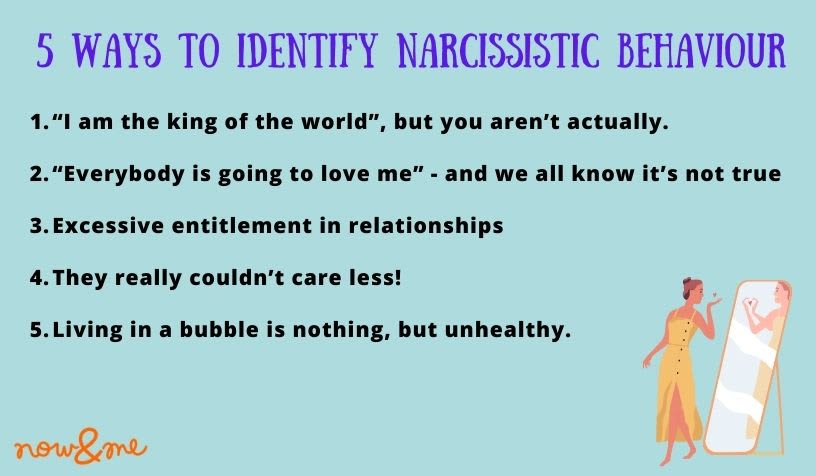 To be able to identify these signs before you yourself start getting affected, here are a few signs to look for:

Grandiosity is the defining characteristic of narcissism, wherein there is an unrealistic sense of superiority. Narcissists believe they are unique or “special” and can only be understood by other special people, believing that they are too good for anything average or ordinary. There is also always an exaggerated sense of self-importance.

The occasional compliments are not enough for such people. Narcissists need constant food for their ego, so they surround themselves with people who are willing to cater to their obsessive craving for affirmation. These relationships are very one-sided, as it’s all about what the admirer can do for the narcissist, never the other way around. And suppose there is ever an interruption or diminishment in the admirer’s attention and praise. In that case, the narcissist treats it as a betrayal, along with feelings of being slighted, mistreated, depleted, and enraged when ignored.

Narcissists expect favourable treatment as their due. They truly believe that whatever they want, they should get. They also expect the people around them to automatically comply with their every wish and whim and that this is their only value. If one doesn't anticipate and meet their every need, then they're useless. Therefore, relationships are often seen as a source of fulfilling their needs.

In a time where having empathy ensures a bit of humanity in this cruel world, Narcissists are unable to develop the ability to identify with the feelings of others—to put themselves in other people’s shoes. In other words, they lack empathy. In many ways, they view the people in their lives as objects—there to serve their needs. As a consequence, they don’t think twice about taking advantage of others to achieve their own ends. Narcissists simply don’t think about how their behaviour affects others, which leads them to not take responsibility for their own actions.

5. Living in a bubble is nothing, but unhealthy.

Since reality doesn’t support their grandiose view of themselves, narcissists live in a fantasy world propped up by distortion, self-deception, and magical thinking. They spin self-glorifying fantasies of unlimited success, power, brilliance, attractiveness, and ideal love that make them feel special and in control. These fantasies protect them from feelings of inner emptiness and shame, so facts and opinions that contradict them are ignored or rationalized away. Anything that threatens to burst the fantasy bubble is met with extreme defensiveness and even rage.

How to Deal with A Narcissist?

Before you fall their fantasies that may seem larger than life, be mindful of some of these tips:

1. Look at how they treat others: If the narcissist lies, manipulates, hurts, and disrespects others, they will eventually treat you the same way. 2. Take off the rose-colored glasses: It’s important to see the narcissist in your life for who they really are, not who you want them to be. Stop making excuses for bad behavior or minimizing the hurt it’s causing you. Take action before it’s too late! 3. Focus on your own dreams: Instead of losing yourself in the narcissist’s delusions, focus on the things you want for yourself. 4. Set healthy boundaries: If preserving your relationship with the narcissist is important to you, you will have to tread softly. Try to deliver your message calmly, respectfully, and as gently as possible. Focus on how their behavior makes you feel, and if they respond with anger and defensiveness, try to remain calm. Walk away if need be and revisit the conversation later. 5. Be prepared for other changes in the relationship: The narcissist will feel threatened and upset by your attempts to take control of your life. To compensate, they may step up their demands in other aspects of the relationship, distance themselves to punish you, or attempt to manipulate or charm you into giving up the new boundaries. It’s up to you to stand firm.

As much exhausting as it may look, if you ever think that you’re in a position to be able to help this person get ready for treatment, then take that step, and it will be worth it, not only for them, but also the people around them.

If you have an experience so far in dealing with such people, or you think you have noticed any more signs then sign up today at Now&Me, and share your experiences, so that we can together understand narcissism beyond just being a personality trait.

1. Will Narcissists Ever Change?

Even though narcissists are known to be so full of themselves that they may be resistant to change, the fact is that everybody is capable of change. The truth is that since narcissists often believe themselves to be extremely great, they often deny treatment or any sort of confrontation at all, which is why they seem to be inevitably in love with who they are, in an unhealthy manner, of course.

2. What Do Narcissists Do When You Leave Them?

Sometimes they will miss what you did for them or try to get you back to help them again, but that’s all it is. Narcissists will probably try and replace you soon after you leave to be able to fulfil what they have lost.

Unfortunately, there is no simple answer to this question. People are complex. I do not think we can simply label people with narcissistic adaptations as either good or bad. Nor can we always draw a clear line between what we can control and what is controlling us. People with any personality disorder in general are complex to understand.